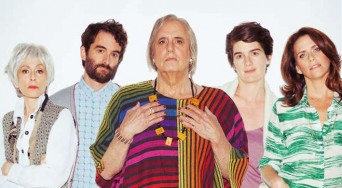 I watch a lot of television, so much so that when Liz Lemon referred to it as “My best friend TV” I was nodding so hard with recognition I’m surprised I didn’t hurt myself.

I watch everything (except reality because nope) from cop shows to sitcoms to ponderous dramas to offbeat tragicomedies (my personal favorite).

So, with my ear constantly to the ground, listening out for the next big thing coming to our screens, I’m not really sure how “Transparent” slipped under my radar. The show was released in its entirety, “OITNB”-style, in late September, on Amazon Prime, but I only stumbled upon it last week when reading about its creator Jill Soloway on IMDB.

Now, believe me when I tell you the news of a new TV show doesn’t get by me easily. My news feed is basically an ever-updating version of TV Guide. When I type the letter A into my browser it auto-completes to The AV Club. The show has been very popular, occupying Amazon Prime’s No. 1 slot for weeks, and a quick google confirms the show has been a quiet hit with critics, but why the lack of buzz? Maybe this is just the slow burn of a new show — I was an early AHS fan and have watched it go from something I may as well have made up in my head to the most talked about show on social media — but I suspect another reason for the quiet surrounding “Transparent:” its subject matter.

“Transparent” is a finely crafted, beautifully acted dramedy, a textured and layered character study about liberal, affluent Los Angeles Jewish family, the Pfeffermans, and their secrets.

Youngest daughter Ali is a directionless depressive with some gender issues to work out, middle son Josh may seem like a superficial hipster, but underneath he’s nursing the wounds of an inappropriate relationship with his former babysitter. Oldest sister Sarah is a bored, lonely housewife who re-connects with a lesbian lover from her college days and jumps ship perhaps a little too hastily.

The central secret, from which the show derives the primary meaning of its title, is that their father, whom they know as Mort, mild-mannered retired academic, is trans and now ready to come out.

As Mort begins to live every day as Maura and reveal this true identity to her children, we get a nuanced and honest glimpse into the trials and triumphs of the early days of transition. What’s most commendable is the truthful way these trans rites of passage are portrayed, neither drifting into after-school special melodrama or pride pamphlet wish fulfillment.

Though Maura is played by the admittedly cis Jeffrey Tambor, who you may remember from “Arrested Development,” there are several trans actors in small roles, creating a believable backdrop and providing much needed representation for the trans community. Most standout among these is perhaps trans comedian Ian Harvie, who puts in an understated performance as Dale, lumberjack-like professor and object of Ali’s masculinity fetish.

Incidentally, Gabi Hoffman, who plays Ali, is the heart and soul of the show, playing a truly queer character whose ever-shifting identity, gender fluid appearance and refusal to fully define herself is a surprising sight for television. I mean, I love you, TV, but you sure like to put people in boxes.

This fondness for boxes brings me back to the lack of hype surrounding “Transparent.” Maura is not glamorous like Laverne Cox and, despite featuring a fair amount of sex, the show actually manages for the most part to avoid the male gaze. None of the siblings could rightly be referred to as “the hot one,” by conventional standards anyway. Its creator, Jill Soloway, is not young or outspoken enough to be scrutinized and analyzed to death, like Lena Dunham.

“Transparent” is simply a really good, really honest show. It approaches a subject that is so easy to get wrong with a grace, pathos and humor that make it instantly relatable to anyone who watches.

What is really interesting is that the show creates a cast of characters sitting at various points on the gender and sexuality scale. Without the constraints of network, or even cable (which is liberal, but, I have the feeling, maybe not this liberal) Soloway has been able to make a show about family with a trans woman, two lesbians, a gender fluid-questioning woman and a whole host of queer background characters.

TV’s usual boxes dictate that we must have “The L Word” — a show about being gay — or “United States of Tara” or “Six Feet Under” — shows about family allotted their one significant gay character there to represent us as an ambassador from the queer community. In the brave new world of online content, shows like “OITNB” and “Transparent” reflect the real world of myriad sexualities and identities.

Hopefully, it lacks the bright, sensational sexiness of its Netflix-based cousin, “Transparent” can become as much a part of our pop culture consciousness and start as many important conversations. Now renewed for a second season, it certainly has the chance.