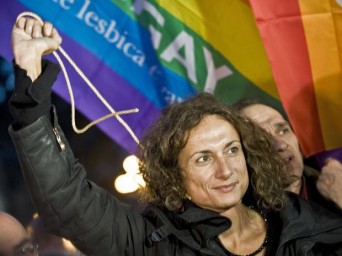 A transgender former Italian parliamentarian on Monday was reportedly arrested for the second time in less than a day at the 2014 Winter Olympics in Sochi, Russia.

Imma Battaglia of the Gay Project, an Italian LGBT advocacy group, told the Washington Blade that four police officers took Vladimir Luxuria and two members of the television crew who were with her into custody as they tried to enter the an arena where a semifinal match between the Canadian and Swiss women’s hockey teams was about to take place.

Initial reports indicate officers asked Luxuria, who was wearing a rainbow suit, not to show a rainbow flag with “being gay is ok” written onto it. Luca Possenti of Famiglie Arcobaleno, a group that advocates on behalf of Italian LGBT parents and those who want to have children, told the Blade that officers arrested Luxuria after she began shouting the slogan in front of cameras.