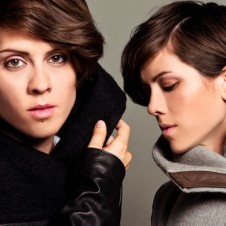 Since the first time I heard Tegan and Sara back in 2001, their music has always had a place in the soundtrack of my life. Their songs are emotional and sometimes full of angst, but always have an infectious melody and hook. I go through phases with music where I listen to one artist obsessively, sometimes for weeks. Lately, Tegan and Sara has been my go to. Recently, a friend asked me about my favorite songs and it was very hard to narrow down, so I decided to make a top 10 list.

10. Hell (Sainthood, 2009)
Tegan Quin has said that she wrote this song about her neighborhood in Vancouver, which the Vancouver Sun called “Four Blocks of Hell.” It also has a theme of unrequited love about a girl that she eventually got. The melody gets stuck in my head and won’t let go. This song is great when you need the perfect loud, angsty song tinged with aggression.

9. My Number (This Business of Art, 2000)
The angst of wanting to give yourself completely to another, but wanting to make sure they aren’t going to break you is the primary theme of this song. Just give them your number and worry about the consequences later! You’ll never know if you don’t make that leap of faith is the song’s advice.

8. How Come You Don’t Want Me (Heartthrob, 2013)
After getting the number, eventually there’s a break-up in so many cases. This is a song about the end of a relationship. Tegan and Sara write about matters of the heart and breakups a lot. This song can fit into many people’s lives. Sometimes, it stings when you see your ex with their new girlfriend and you think, “You left me for that? Are you serious?” I highly recommend pairing this listening with the Lesbian Breakup Cocktail *.

1.5 Sweet Tea Vodka (because all lesbians drink tea)
3 Unsweetened cranberry juice (for bitterness and the UTI)
Salt rim (for the salty, salty tears)
On the rocks (just like the relationship)

7. This is Everything (Under Feet Like Ours, 1999)
This song is about giving yourself completely to someone, about putting everything you have into the relationship, and it not being reciprocated. Loving someone can make you very vulnerable, and sometimes you can suffer. Ultimately, she just wants to love “without aching”. Don’t we all?

6. You Wouldn’t Like Me (So Jealous, 2004)
For me, this song is all about self-doubt and being afraid to show someone the real you. Maybe you lost yourself in your last relationship, maybe your heart was broken. In order to love again, you need to move past this and learn to trust someone else.

4. Back In Your Head (The Con, 2007)
This song is all too familiar for me. It’s about getting too comfortable and complacent in a relationship. It’s about wanting to get that passionate love back that was there in the beginning and not being able to. (see song No. 8)

3. Call It Off (The Con, 2007)
The relationship is not working. You’re miserable and you decide to break it off to save yourself. You know it’s the right thing to do, but you start second guessing and wondering if it’s the right thing. We’ve all been there.

2. Nineteen (The Con, 2007)
This song is about many things. It is about being young and in love, and all the agony that goes along with that. It is a song about heartbreak and distance. When you’re 19, everything seems so big. Every emotion is taken to an all new level and this song is a perfect mix of angst and heartbreak. It is completely relatable.

1. Closer (Heartthrob, 2013)
This song is pure pop perfection. It’s all about you and your crush taking it to the next level and making that jump to getting physical. Just grab her and get closer already!

What songs would be in your top 10? Tell us below in the comments!

One Response to “Top 10 Tegan and Sara tunes”