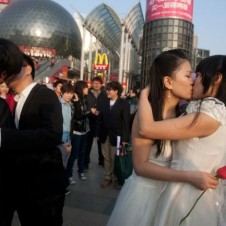 In men’s professional sports, there is all of one openly gay player currently active, and his coming out is sure to make headlines for weeks–and yet, when professional female athletes come out, it’s treated as something of a non-event and largely ignored. Most news stories regarding the Boy Scouts focus on their continuing ban on gay scouts and leaders, but the Girl Scouts quietly support girls of all kinds, no matter their orientation; even girls who happen to be biologically male are welcome.

This could be chalked up to how male-focused society in general is, but studies have shown that tolerance of lesbians tends to be higher than that of gay men, and lesbians are less likely to be targeted for violence because of their sexuality. One of University of California, Davis researcher Gregory Herek’s studies found that 38 percent of gay men had been victims of theft, vandalism, or violence–sexual or otherwise–because of their perceived orientation, while only 13 percent of lesbians reported the same.