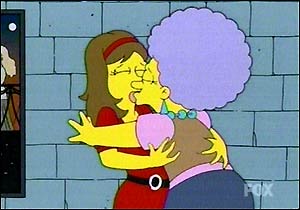 For decades now, The Simpsons has been credited with making the world laugh. But has the show’s portrayal of gay characters helped advance gay acceptance? German librarian Erwin In het Panhuis, who has analyzed over 490 “gay” scenes and over 70 homosexual characters that have been featured in the show, argues yes in his new book “Behind the Gay Laughter: Homosexuality in ‘The Simpsons.'”

“[The Simpsons] treats homosexuality as something normal in a media environment which can usually be very hostile to the point of view. Homer has kissed other men on the lips more than 50 times throughout the series but despite that he’s happily married to his wife,” In het Panhuis notes. “He is sometimes heterosexual, sometimes gay and sometimes homophobic.” A substantial list of The Simpsons’ LGBT characters appears over at The Simpsons Wiki where you can relive some of The Simpsons more memorable LGBT moments.

2 Responses to “‘The Simpsons’ impact on the LGBTQ community”