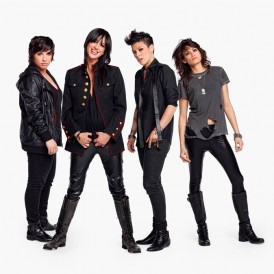 Wanna live like a rock star? Think it’s all parties, trashing guitars, and long bus trips with groovy people hanging out and along for the ride? Trash those fantasies and get a real peek inside the life of an emerging punk rock girl band, Hunter Valentine on the “Real L Word”. They tell it straight and play it loud.

“I really like loud rock and roll and that’s the way I see myself playing music for the rest of my life,” says Kiyomi McCloskey, 27, front-woman and guitarist of the all girl punk rock band Hunter Valentine.

“I’ve always wanted to have a band,” says Kiyomi, who up until teaming up with drummer Laura Petracca eight years ago to form Hunter Valentine was charting the music world as a solo acoustic artist.

That all changed with a chance meeting at a crowded bar. The two women bonded over cheap bear and rail whiskey and a band was born. The third time is a charm, it was the third band for Kiyomi, who started bands Trash Before Class and Dirty Remedy before Hunter Valentine formed.

“I still play shows on my own just to keep my chops up as an acoustic player, but I love playing with the band it just takes it to that next level of sound,” Kiyomi says.

It’s been an organic and slow evolution for the band that appears to be on the verge of hitting the high life.