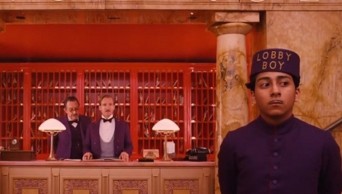 “The Grand Budapest Hotel,” directed by Wes Anderson, is a whimsical masterpiece filled with vintage luggage.

Well known for his theatrical storytelling, Anderson’s latest creation is set in the late 1970s and early 1930s. Told through first person narration, the film transports viewers into the adventurous world of a concierge and his protégé.

The film features an all-star cast that includes Ralph Fiennes, Tilda Swinton, Bill Murray and Edward Norton (just to name a few). As usual with Anderson’s films, his cast of peculiar yet endearing characters melt perfectly together. Of particular interest is Tilda Swinton’s makeup. Swinton, who plays a wealthy elderly woman named Madame D., looks as though she is on her last leg. The makeup was so well done that even her eyes even appeared to be googly in some frames.

Anderson’s cast of multi-generational characters embark on their individual paths and murder, wealth and missing artwork set the course for this bedtime story. In many ways the actors play out their parts like an Eastern European ballet where every step has been choreographed so delicately that as a whole they seamlessly blend together.

The film was shot primarily in Germany where Anderson captured much of that stoic pastel-like feel Germany possesses. Introduced into the plot is the threat of an upcoming war and not-so-friendly military presence, which suggests a reference to the Nazi party. The careful selection of props and wardrobe perfectly bring the set to life. The carefully planned lighting in this film creates a magnificent ambiance. Overall the film oozes with beauty and is one you’ll definitely want to check in — or rather check out.