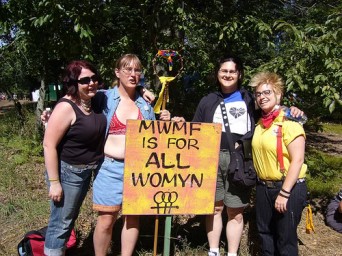 The backstory: The infamous Michigan Womyn’s Musical Festival is a much beloved multi-day festival that has been held for decades in Hart, Michigan. It also has a controversial “womyn-born-womyn” (WBW) policy that excludes transgender women from entering “the land.” Trans allies actively protest and many major acts, including Andrea Gibson and the Indigo Girls, have started distancing themselves from the event due to the policy. But festival founder Lisa Vogel claims that the exclusion of transwomen is not inherently transphobic and attendees are vocally divided on the issues. What do you think?

Our goal in sharing these perspectives is to encourage conversation within the community that might help heal our differences. The views expressed herein are that of the author and not necessarily that of Lesbian.com

Trigger warning: This discussion includes varying viewpoints on gender, anatomy and sexuality that might be triggering for some readers.

My introduction to the Michigan Womyn’s festival came via the LGBTQ section at Barnes and Noble. At 19, I felt compelled to learn all I could about lesbianism before committing. I can’t recall the name of the book which explained everything from what The Lesbian Avengers were to why lesbians made jokes about U-Hauls, but it boasted a whole section on the festival.

Created in 1976 as a safe space for women, the annual event offered camping and nudity and tofu and drum circles and I knew right away I would never attend. Still, I understood its import, the significance of women only space. But even in 1999 as I slouched in the bookstore’s overstuffed chair, the word woman was coming to mean something more complicated than many second wave feminists understood.

Remember when lesbianism was a psychiatrically defined disorder? A lavender menace at the corner of the feminist movement? I don’t. But women like Lisa Vogel, founder of The Michigan Womyn’s Festival must. The word transgender is on a similar journey now. Moving slowly, slowly from the embodiment of freakish difference to a normalized identity, trans* as a designation is just as fraught as lesbianism used to be (and in many small towns and narrow minded families, still is).

Over the years, Vogel has come under fire by trans* activists and allies for her refusal to welcome transwomen onto the land. To explain her desire that the festival remain a “womyn-born-womyn” only space, Vogel appeals to its place in the feminist movement’s history. “We started Festival,” she writes, “to make a home where we could grow our own definition of female identity. At the time, the mere idea of a female identity autonomous of male identity was revolutionary.”

But revolution is ongoing, and just as lesbians played a key role in the feminist movement, trans* activists have advanced the LGBTQ movement. At least according to The Indigo Girls. “We are in a time of struggle and rapid changes in our movement,” they write on their website, “and we would be remiss to not recognize that many of the strides that have been made are a result of Trans Activism and the strength and perspective they have brought to the queer and feminist revolutions.” This statement is particularly noteworthy from a folk/rock duo known as much for their activism as their music. Whereas another celebrity might slap her name on whatever organization her agent thinks will advance her career, the Indigo Girls have proved themselves genuine, making informed choices about which causes to endorse. Maybe that’s why their statement regarding The Michigan Womyns Festival has caused such a stir.

Although they will play the festival this year, they believe “the time is long overdue for a change of [The Festival’s] intention, to one that states very plainly the inclusion of Trans Womyn. We feel that if someone identifies as a womyn [sic], they are a womyn [sic] and should be welcomed into our community with open arms. We will only be stronger for it.” With this in mind, they plan to donate any money they make playing the festival towards trans* activism. They write: “We have made it clear that this will be our last time at the Festival until MWMF shows visible and concrete signs of changing their intention.”

Perhaps the musicians’ response elevated news of the controversy; however, their message actually came in the aftermath of a 2013 petition posted on Change.org by trans* comedian and activist Red Durkin. Durkin’s petition calls out the Indigo Girls specifically, requesting that they and other scheduled performers “stand in solidarity with transgender women and our allies and not perform at the Michigan Womyn’s Music Festival until Lisa Vogel and the other organizers fully and openly welcome all self-identified women.” Durkin asks that trans* allies boycott the festival, stating that the “Michigan Womyn’s Music Festival is not safe for any women until it is welcoming for all women.”

A provocative statement given the festival’s raison d’être and one that has given rise to explosive reactions. While most fans support The Indigo Girls’ decision, calling it “brave” and “on the right side of history,” as news spread about their announcement, their Facebook page flooded with hyperbolic protests.

“Very disappointing to see you cave to the trans-gimme people,” one commenter writes, characterizing the struggle to make the festival a trans-inclusive space as “a male power grab and invasion of space. Men have been trying to get into Moon Lodge for centuries. There is no intention to participate and share and nourish,” she continues, “only to invade and destroy and desecrate. And once ‘conquered’ they will move on to some new distraction. How sad that The Indigo Girls, thought wise by so many women over the years have now proven themselves easily fooled by men in women’s clothing (or re-arranged body parts).”

While the idea that men are plotting to weasel their way onto the land seems far-fetched, many attendees have voiced more nuanced thoughts about the controversy. “I’m so, so sick of Fest being framed as transphobic,” says an anonymous eight-year veteran, “as if that’s the only possible explanation for women-born-women gathering exclusively. I also reject the idea that Fest somehow views transwomen as not-really-women. Rather, transwomen are women — just different from WBW. Not better, not worse, just different, and that’s OK. For example, people who were born Jewish have a different experience than those who converted to Judaism. People who converted are not any less Jewish. But, their experience is different, and I would support born-Jewish space, converts-only Jewish space, and all-Jewish space. All of those spaces would be different. And this one week in the woods focuses on the experience of WBW.”

In contrast, another anonymous, loyal fest-goer plans not to attend this year, citing the Indigo Girls as influences. “They said that welcoming transgendered people is ‘the only path to a truly “safe space” for womyn.’ I want to stand in solidarity with my sisters, no matter what their biological origin.”

But is a boycott the best method to get this message across? Many think it isn’t, and Vogel is among their number. She writes: “There is no doubt that complex political debate is healthy and necessary within our communities; however, a boycott, within this context, fails to advance resolution and only seeks to exact damage.”

Both Hill and Vogel believe that wanting a separate space for womyn-born-womyn is not inherently transphobic. Vogel writes that “this false dichotomy prevents progress and understanding. I believe in the integrity of autonomous space used to gather and celebrate for any group, whether that autonomous space is defined by age, race, ethnicity, sexual orientation, ability, gender, class or any other identity. Whatever spaces we carve out in our community to encourage healing and rejuvenation should be accepted, and we should support each other in this endeavor. Nobody should be asked to erase the need for autonomous spaces to demonstrate that they are sisters in struggle.”

One wonders how Vogel feels about country clubs which refuse entry to women or African-Americans. Does she believe in their integrity as well? By no means has the feminist movement achieved all of our goals. And arguably, women still benefit from a space apart from men. But no one is advocating inviting men onto the land, but rather inviting transwomen into the definition of woman. Vogel has said that transwomen have benefitted from male privilege, and in some cases that’s true; however, it’s hard to picture a child desperate to shed the body she was born into benefitting from a penis she never wanted.

Still, that penis is a sticking-point for some attendees.

“Fest is a clothing-optional space,” another anonymous attendee says. “Even though transwomen who have not had surgery don’t identify with having a penis, penises have deep cultural meaning to many women, particularly survivors of sexual assault. I don’t think that some women’s identity should get to trump others’ lived experience. And, it wouldn’t be fair to say that WBW get to take their clothes off, but transwomen don’t (showers are open-air, with one curtained one). It also wouldn’t be fair to say that only transwomen who have had surgery get to come, because that’s so expensive that it would be classist to only invite those who are able to afford surgery.”

In a way this is the crux of the issue, or rather proof that there is no crux, no single issue. In debating the inclusion of transwomen in The Michigan Womyn’s Festival, there are no easily arrived at solutions. Nor should there be. Questions of classism, sexism, separatism, differing concepts of power and purpose all come into play. Debates like this have enriched the feminist movement which, by the way, is not merely about equality for women. It’s about equality period, about acknowledging the interlocking systems of domination effecting society as a whole.

bell hooks writes that women are not “outside the practice of domination in the exclusive role of victim.” In fact, women can be “agents of domination.” It bears considering who exactly is dominant in this scenario. Is it womyn-born-womyn, desperately in need of a festival of their own? Is it transwomen, determined to be accepted on their own terms? As someone who’s already set to boycott the festival because I reflexively boycott anything involving a tent, I can’t authoritatively speak to the complexities of the issue. Truly, I can see it from both sides. Still, I’m not sure what harm it would do to hundreds of blissful attendees if transwomen who grew up feeling isolated, displaced, and different got the chance to see what it’s like to fit in.

In considering the amount of vitriol seen on discussion boards about MichFest, we are moderating comments in hopes of enabling dialogue without attacks. Hate speech of any kind, including misgendering of transwomen, will not be tolerated. Please civilly discuss your ideas, freely but kindly, in the comments below or on our message boards.

One Response to “The fight about MichFest: Revolution is ongoing”