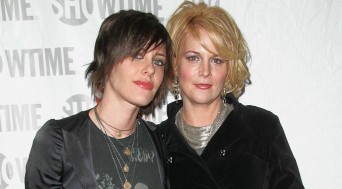 Holloman, perhaps better known as Tina Kennard on the Showtime series, will be making her second appearance at the event. The actress and accomplished painter will be showing and selling prints from her series, “Written on the Body,” poolside at the Palm Springs Hilton Hotel all day Saturday, April 5, during the “L Word Pool Party” and Sunday, April 6, during the “Wet and Wild Pool Party.” She will also be available to personally sign each copy.

Former co-stars Moennig (Shane McCutcheon) and Hailey (Alice Pieszecki) will be joining their former cast mate for the festivities. The cast mini-reunion, a Club Skirts and Showtime collaboration, will celebrate the 10-year anniversary of “The L Word’s” television premiere, commemorating a memorable era in lesbian culture that celebrated our “girls in tight dresses who drag with mustaches.”