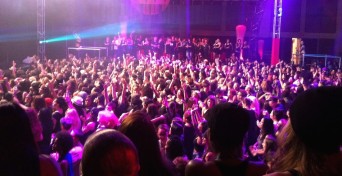 The legendary Club Skirts Dinah Shore Weekend — the biggest lesbian event of its kind in the world — is confirmed to be hosting the only official Gay Games-sanctioned women party this summer in Cleveland, Ohio.

The announcement comes on the heels of the massive success of this past April’s Club Skirts Dinah Shore Weekend in Palm Springs, California, which broke all attendance records and garnered extensive national and worldwide media coverage.

Impressed with the outstanding achievement of Mariah Hanson — the mastermind behind The Dinah — and her team in organizing for over two decades such a high profile event, featuring such an elite group of high caliber performers, organizers of the 2014 Cleveland Games handpicked the event producer extraordinaire to exclusively produce the official lesbian party for Gay Games 9 (GG9).

“We’re immensely honored to be joining forces with the entire Gay Games 9 team and have no doubt our combined efforts will turn this incredibly formidable LGBT Sport and Cultural event into the best one ever,” Mariah Hanson, founder and producer of Club Skirts Dinah Shore Weekend, said.

The bash dubbed “The Victory Party” will take place starting at 8pm eastern time on August 13 at The Velvet Dog, Cleveland’s premiere nightclub and dance destination for 15 years.

“We are thrilled to be teaming up with Mariah Hanson and beyond excited to be bringing such a staple event in LGBT culture to the Velvet Dog,” club manager Georgina Karim said.

Voted Cleveland’s best nightclub for the past five years, The Velvet Dog is located in the warehouse district, a bastion of nightlife in the heart of the city.

“The Dinah team is honored to bring our special brand of high octane event production laced with first class entertainment and music to Cleveland’s Gay Games. We couldn’t have picked a better host location than the Velvet Dog, the premiere nightclub in Cleveland. Plus we love the idea of a rooftop patio,” Hanson said. “We’re expecting a sell out crowd and plan to deliver an unforgettable event, Dinah style.”

Presented by the Cleveland Foundation, Gay Games 9 is one of the biggest sports and cultural festivals in the world and comes to the Cleveland and Akron areas August 9-16, 2014.

“Here at Gay Games 9 we are excited to welcome everyone to our region and especially all the women of the world and what better partners to collaborate with then the most amazing, Club Skirts, The Dinah. This will be the party to attend for all of the women. So, come celebrate ‘participation, inclusion and personal bests’ as we embrace and unite as one,” Michelle DeLozier, Gay Games 9 culture co-chair, said.

Open to all adults — regardless of sexual orientation or athletic ability — Gay Games 9 will host 11,000 participants from all over the world (including countries where homosexuality remains illegal and hidden), and will feature more than 35 sports, band and choral competitions, and community and cultural events.

Launched over 30 years ago, the large scale, weeklong event is about more than just an Olympic-style sporting competition with spectacular ceremonies and parties. It is first and foremost about a celebration of the LGBT community and a celebration of the spirit of unity and diversity. This message holds particular significance as Ohio, while recently ordered to recognize out-of-state gay marriages, still remains in the nationwide race to legalize same-sex marriage in its own state.

Both Hanson and organizers of the 2014 Gay Games see the event as not only a chance to show that the industrial Midwest can be gay-friendly, but also as an important potential catalyst for change.

Hanson has been sending a strong message of inclusion through the Dinah.

The event has not only come to embody the very notion of living life out loud, but has also been systematically transforming lives.

“Club Skirts has been passionately committed to extending its involvement beyond the actual Dinah in promoting and showcasing the rich diversity of our LGBT talents by engaging in and supporting events that create and enhance opportunities for our community,” Hanson said. “We look forward to Gay Games week and can’t wait to ignite Cleveland’s lesbian nightlife.”

Stay tuned as Mariah Hanson will be announcing the headlining act in the coming weeks.

Tickets to the event are $25 per person or $50 for VIP, which includes bottle service opportunity, and access to all VIP areas in all three floors as well as the spectacular roof top patio that overlooks the entire city of Cleveland.