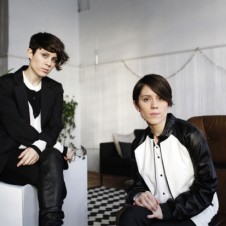 Canadian lesbian twin sister indie pop stars Tegan And Sara just snagged a brand new gig. The “Closer” singers will be serving as music supervisors on the May 7 episode of MTV’s teen comedy “Awkward,” according to Entertainment Weekly.

“The thing that’s been really interesting about having your music placed is that you have really very little say in where or how it’s used,” Sara said. “So this is a really cool opportunity to sort of see what it’s like to be on the other side of it.”