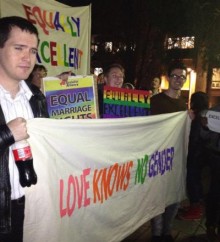 Tasmania’s administration, leaving behind the slow pace of the Australian federal government, has said it will push on with marriage equality plans even if federal plans fail.

[Premier Lara Giddings] said the state government would look to introduce legislation before the end of the year if acts currently before the federal parliament fail.

Legal advice suggested that there was nothing to stop a state going it alone, she said.