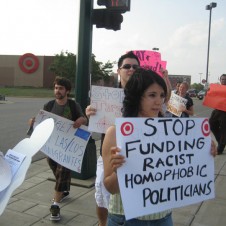 Protests in 2010 against Target’s support of Tom Emmer, who protestors considered anti-immigrant and anti-LGBT. (Photo by Molly Glasgow)

Despite promises to re-evaluate its political giving to be more LGBT-supportive, Target Corporation has given $50,000 to the Republican Governors Association (RGA) so far in 2013, donations that in turn have funded outspokenly anti-LGBT gubernatorial candidates Ken Cuccinelli (R-VA) and Chris Christie (R-NJ). A spokesperson for Target provided the following comment to ThinkProgress, pointing out that Target also gave $50,000 to the Democratic Governors Association, which has backed Cuccinelli and Christie’s pro-LGBT opponents.

Their statement did not clarify how banning oral sex or preventing same-sex couples from marrying affect its business priorities. Giving the same amount to those who support the LGBT community as to those who oppose it does not excuse the latter, and does little to advance the cause of equality. If anything, it indicates that consideration for the LGBT community is not a business priority for Target.