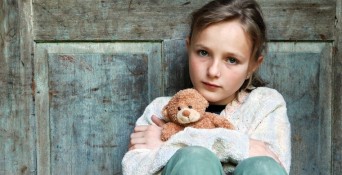 Although I believed to my very young core that my mother would protect me, hitchhiking from the south to the Midwest was physically and mentally exhausting. I had mixed emotions whenever a man would pull up in his car or truck to offer to take us a few more miles. On the one hand, my feet, legs and eyelids all longed for rest, but my heart was ever untrusting of a stranger’s kindness.

In the pitch blackness of night, we arrived in the tiny town in the heart of Missouri where we were dropped off in a state park.

When we finally made it to the little trailer we were to call home, deeper in the sticks than I had ever experienced before, I wasn’t excited. It was simply another place with another group of empty faces to navigate until we quietly slipped away in the middle of the night, like we did in every other town. I went to school during the day and played in the garbage dump in the valley behind the trailer in the afternoons. I liked climbing on the old metal skeletons of vehicles and tools gone by. It was my own little world with a population of one.

I didn’t enjoy the town, but fell into a routine that made me feel safe and something resembling normal. When I started hearing talk about plans to rob a local convenience store floating around the house, I knew life was going to change once again. Although not much of a talker, I was a writer and immediately went to record my take on the situation. My little black journal with “Diary” inscribed in gold across the front was my place to feel heard.

Children are known to believe in things that aren’t real. In the younger years, it’s often Santa Claus and the tooth fairy. For my 11-year-old self it was the integrity of diary locks. I learned the folly of my beliefs when my mother went into a rage over the words I thought were safely vaulted. The penalties were severe and the diary was destroyed.

The day of the armed robbery, my mother and a man I’d never seen before rushed into our tiny country trailer like a spring tornado. The chaos was deafening as they grabbed guns, mom’s personal items and I don’t know what else. As quickly as they rushed in, they were gone and all was silent again.

For the rest of the day, I went about my regular business of feeding the dogs and myself. Forgetting again to peek inside the oven before pre-heating it for my TV dinner, I opened the door to find another melted spatula in the cast iron pan. I immediately burst into tears. I knew my mother would be upset when she learned what I had done. I would get hit, but worse, I would feel the burn of her disdain. I had no reason to worry as the sun fell and rose without her return.

Days went by, then a week and then longer. Occasionally, I hiked to the closest neighbor’s house, hiding behind trees, peering at the glowing windows from afar. I imagined what it would be like in their warm house with tasty food, friendly conversation and some kind of safe routine like the ones I often read about in books. I considered knocking on the door and asking to use the phone, but I couldn’t think of a single number to call. I had been keeping everything together thus far, even though I wondered what would happen when I ran out of dog food, not to mention my own food.

I don’t know how long I was living on my own before my fifth grade teacher drove in to check on me. I had mixed emotions upon seeing her. On one hand I was relieved to no longer be alone; however, I didn’t want to chance missing my mother’s return.

There are a few holes in my memory. I know I must have been taken to a police station, although what I remember more clearly is standing at the counter on the “trucker side” of a truck stop convenience center, watching the burly travelers go about their daily business as we sent some sort of message to my grandmother down in Florida. Not too long after that, her blue Ford van dubbed the “The General” pulled up and I was flooded with pure relief. Sure, we hit a few bumps on our way out of town, including seeing the father I’d never met and didn’t know lived close by, try to force me out of the van while my grandmother visited the local doctor to get some valium. But, at the end of the day, none of it mattered. Soon enough we were on I-44, singing “On the Road Again” with Willie Nelson as he played his guitar for us from the eight track.

Sure, I have abandonment issues. A childhood full of being forgotten at schools, left with strange people from time to time and abandoned in the Midwest can do that to a girl. Even now, although my days are filled with love and connection, I still sometimes fear a solitary future and struggle with whether or not I’m worthy of complete acceptance and love. As the years roll on, I stay true on my path of self-exploration and life celebration. I tend to throw myself out there, with all my shimmering awkward and beautiful facets to see who stays around for wine, cheese and maybe some deep conversation. Of course, I get more than a few odd glances when people meet me, but I find this authenticity of self tends to weed out those who would waste my time. Why would I want to surround myself with anyone other than the most inspiring, quirky and wonderful? As far as the melted utensils go, it still happens now and again. But things have shifted. I smile now. I love being in charge of my own destiny. There’s no consternation and no fear of being beaten.

Whenever I hear people talk nostalgically about childhood, wishing they could go back, I feel giddy to be an adult. It just doesn’t get old. I eat pizza and cake when I want to, even in reverse order. I know that I’ll wake up with my stuff in the same place because I’m not going to be moving in the middle of the night. My house is warm and full of food, and curling up on the couch with the girlfriend and a dog or four is part of my routine. Sure, I really want a larger house, more money in my savings account and a new Macbook Air, but really, life is pretty sweet. Now, melting another utensil is the perfect excuse to browse my favorite online shop or plan a trip to that cool ass kitchen store in town. Have you seen the new Star Trek spatula on thinkgeek.com?! Hey, I just remembered, I need to bake some cookies or maybe it was a casserole. Whatever, I’m off to preheat the oven.

What is your favorite aspect of being an adult? I’d love to hear.