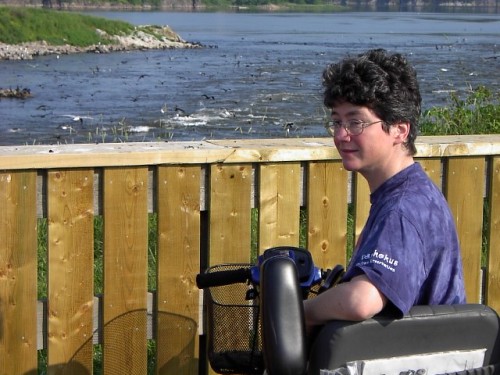 From my bed, I can look out the window into the sunroom and see a thick braid of sweet grass, burned at one end, hanging on the wall. There’s a story surrounding the sweet grass.

Because I have chronic progressive multiple sclerosis, my partner Janet and I travel north every summer to stay cool. This year, we drove to Prince Edward Island (PEI). To make things easier for Janet and because we enjoy her company, Janet Louise joined us on our great adventure. We became the traveling trio of Pam and the Janets.

In order to plan our daily activities, we contacted the PEI Chamber of Commerce and received their extensive magazine of restaurants, activities, and places to stay. We found a lesbian-owned bed and breakfast with a fully handicapped accessible cottage on purpleroofs.com. Centrally located in the Rainbow Bridge area, Evening Primrose perfectly met our needs.

We enjoy Native American culture, so we crossed the bridge to visit the Micmac Indian Preserve on Lennox Island. The houses were old and small and the roads were rough without streetlights. However, the Visitor Center was brand-new (and wheelchair accessible). As we entered, we spotted an artist painting indigenous symbols and decorations on the walls. Janet Louise, the most gregarious of the trio, struck up a conversation with Red Feather, the artist. He invited us to join him at the restaurant next to the Center. We went, of course, and were introduced to Leslie, the restaurant manager. Once they realized we were lesbians, they summoned all their gay and lesbian friends to meet us, including the reigning Canadian Bacardi Drag Queen contest winner.

We returned the next evening at Red Feather’s invitation. He and several youth were fearlessly climbing ladders to paint the Micmac’s tribal symbol, the turtle, on the ceiling. I was shocked when he asked me to climb the ladder and complete the last strokes of the mural. According to tribal lore, my soul would always be with the Micmacs on Lennox Island, if I contributed to the painting. With Red Feather on the ladder behind me and the Janets on each side, I finished the turtle.

Each time we met with our new friends, we learned more about the history and culture of the tribe. Canadian Indians are known as “First Nation People.” The Micmacs on Lennox Island had always been ruled by men. As time passed, they began having financial difficulties so they allowed women into the Tribal Council and they began to prosper. Also, until 25 years ago, there was no bridge connecting Lennox Island to the mainland. In the summer, they would row over but in the winter they had to walk across the ice. After a very pregnant woman fell through the ice (and luckily survived), the Province approved the funding for the bridge.

As a tribal elder, Red Feather had the authority to make me an honorary member of the tribe. First, he gave me the Micmac name, Two Trees, which to me symbolized strength to my failing legs. He then blessed me. He lit one end of the sweet grass braid and prayed in his language while moving the braid slowly around me to clear any bad energy. He also blessed the Janets.

When we got home, Janet hung the braid on the wall in the sunroom. When the breeze comes in through the open windows, it wafts the sweet scent throughout the front of the house.

We’ve gone back several times since and each time have connected with some of our friends although we never saw Red Feather again. The Tribe is doing better. Pipes were being laid so that all homes would have running water and the main road will soon be paved. The third floor of the Visitor Center was to be transformed into a youth training center and the restaurant would be their cafeteria. Although the murals had been painted over, I could see the outline of the turtle on the ceiling. I feel as though Red Feather was right, a piece of my soul remains on Lennox Island, PEI, and I yearn to return again someday.

Pam Stewart lives in Delaware with her partner of 21 years. She runs a small editing business. In her spare time, she writes and blogs about her experiences as a disabled person and politics. She has had chronic progressive multiple sclerosis for over 20 years, but it doesn’t have her.

2 Responses to “Summer of sweet grass”