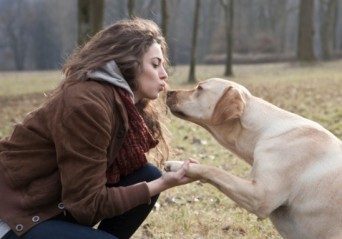 That special connection you feel with your dog is all in your mind — quite literally. A brand new and innovative Hungarian study compared human and dog brains in a functional magnetic resonance imaging (fMRI) scanner and discovered some surprising similarities when it comes to the area of the brain that processes vocal information. In a nutshell, what they found was that dogs and humans process and respond similarly to vocalizations, including speech, suggesting that people who talk to their dogs aren’t total weirdos. Dog owners will be pleased to hear that after thousands of years of cohabitation!

Numerous researchers have looked at how dogs respond to human vocalizations, with some research being done vice-versa as well (other species, such as the cat, have also been profiled: for example, a recent study showed that cats vocalize in a range similar to human infants to get attention from their people). While researchers agree that dogs cannot understand human speech, they definitely respond to it, and can learn basic voice commands. Dogs also appear responsive to vocalizations like crying or laughter, indicating that they can understand emotions among their human companions.