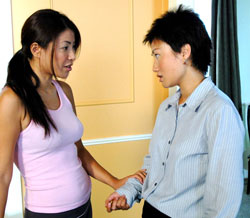 According to a new study called the “LGBT Asian and Pacific Islander Individuals and Same-Sex Couples,” 2.8 percent of Asian and Pacific Islander and (API) adults residing in the US identify as LGBT. “Detailed data analysis reveals vulnerable LGBT subgroups including Pacific Islanders and Native Hawaiians, female same-sex couples, couples where both partners are API and couples with children,” said Kastanis. “These groups tend to experience lower rates of health insurance coverage, lower academic achievement, higher rates of non-citizenship status, and higher rates of unemployment than other API couples.”

“The findings show that API individuals in same-sex couples are more likely than those in different-sex couples to both have a college degree. However, API same-sex couples raising children have much lower levels of education than their different sex counterparts, which may explain some of their economic vulnerability,” Gates said in the report.