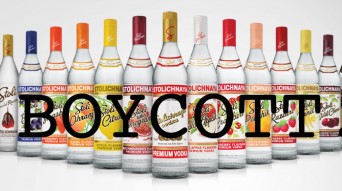 In his first U.S. interview since a worldwide boycott was launched against Stolichnaya vodka in response to the Russian government’s anti-gay crackdown, the CEO of the company that owns the iconic “Stoli” brand insisted that his company is “not a Russian company,” even as he confirmed that the company operates a distillery in Russia, that “several hundred” of its 2,500 employees are in Russia and that it obtains its ingredients from Russia. Val Mendeleev, chief operating officer of SPI Group, the Luxembourg-based company which owns the brand outside of Russia, also announced that in response to the boycott the company would be making a financial donation to an unspecified group working on behalf of Russian LGBT activists fighting against the Russian government’s anti-gay policies.

Sitting down for an in-studio interview with me on SiriusXM Progress on Monday, Mendeleev described himself as an “ex-Russian,” having left the country 20 years ago, and said that the billionaire owner of the SPI Group, Yuri Scheffler, is an “ex-Russian” and a political opponent of the current Russian government. Scheffler, Mendeleev said, left the country 10 years ago, lives in London and Switzerland, and has since been in a bitter business dispute with the Russian government. Both men, Mendeleev said, condemn the Russian anti-gay policies, as did the company in an open letter several days ago. SPI group, Mendeleev said, owns the Stoli name worldwide but is not allowed to sell the brand inside Russia, where a state-owned company owns and markets it; because of the dispute, SPI changed the label on the bottle to say “premium” vodka, from “Russian” vodka in 2007.