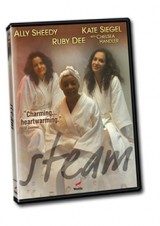 A sweet lesbian coming out story headlines this poignant trio of women’s stories.

Sexy newcomer Kate Siegel stars as a young lesbian coming out and falling in love — one of the poignant stories of three women who visit the same steam room.

This terrific new drama unfolds the stories of three amazing and very different women (a divorced Mom, an elderly widow and a young lesbian coming out and falling in love) as their paths cross in a steam room.

This wonderfully entertaining drama stars Ally Sheedy (High Art, The Breakfast Club), Ruby Dee (the legendary actress of Raisin in the Sun fame) and beautiful Kate Siegel (Curse of the Black Dahlia, Man Up) as a young lesbian coming out and falling in love with her new friend (played by Reshma Shetty, star of the hit show “Royal Pains”). Plus, an
awesome appearance by Chelsea Handler!

DELUXE EDITION This deluxe edition comes with a terrific bonus extra: “The Making of Steam” featurette

“The three stories are thoughtfully executed, brilliantly acted . . . we love it.” – GayList Daily

“Steam does love scenes quite well — living up to its title nicely. The aforementioned chemistry between Elizabeth and Niala is particularly appealing — making their scenes together really light up the screen.” — AfterEllen.com