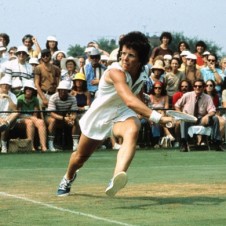 Tennis legend Billie Jean King, who had a long journey to her public coming out. Photo via Stanford/courtesy of Billy Jean King.

Professional basketball player Jason Collins made a splash this week by announcing he is gay. This is no small feat, to be sure. Even in 2013, coming out can be difficult, let alone when you are part of the macho sub-culture that is male professional sports. But did you know that a bunch of women professional athletes came out way before him? They did!

By pointing out that these women were out and proud before Collins is not meant to diminish the courage it took him to do what he did. However, I do think it’s important to acknowledge the women who came before him because, as Kate Sheppard notes, “Although his coming out in ‘Sports Illustrated’ is big news, NBA star Jason Collins is not the “first openly gay athlete in professional North American team sports,” as some have claimed.”

One Response to “Spotlight on inspiring lesbian athletes”