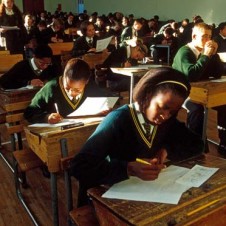 A lesbian couple in Mpumalanga, South Africa are being told to split-up or risk having their son expelled from Secunda Highveld Christian School.  Samantha and Kally Mabe, 27 and 26 respectively, are a legally married couple accused of falsifying information stating their sexual orientation in the school’s application letter.

The couple was called into a meeting with the school’s principal last month after the boy told his teachers he had two mothers. There, they were told their relationship was “problematic.” After a second meeting, this time with a pastor, Kally says, “The pastor said if they had known we were a lesbian couple, they would never have allowed our son in the school.”