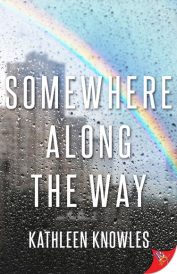 By Kathleen Knowles
Special to Lesbian.com

Somewhere Along The Way- When Maxine C ooper moves to San Francisco during the summer of 1981, she learns that
wherever you run, you cannot escape yourself.

When I came home, thinking vaguely of what to eat for dinner, I was startled when Tory walked into the kitchen.
“Hi there, I’ve got the night off. Want me to cook us something?” She was one of the cooks at the house, Chris was the other. Neither Marilyn or I really had to do anything but wash dishes.

“Sure. Anything. Is Marilyn going to join us?” I asked.

“Oh no, she went up north to see her mom. What about Chris?”

“He’s working late. It’s just us. I guess.” This realization hit me, and I think Tory was cognizant of the meaning of “just us” because she gave me a look, inscrutable but a look just the same.

“Wanna get high?” I offered.

Tory looked over her shoulder at me as she opened the fridge. “Absolutely.”

I lit a joint and handed it to her and poured myself a drink.

She’d made some kind of baked chicken with a glaze and vegetables. We’d barely started to eat when the tension exploded for both of us and we raced to bed.

We did it in my bed, which was still a mattress on the floor, which she made mention of, though not unkindly.
“It serves the purpose,” she said, as I parted her legs and plunged my fingers into her eliciting a nice gasp.

I bent over her and said, “I’ve been thinking about this since you made your announcement.”

“You have?” she said, a little raggedly. My touch was having the desired effect. Once she was truly wet, I replaced my fingers with my tongue.

“Wow,” was her verdict after two orgasms in quick succession. I just grinned.

I let her take me with her hand for a short interval.

“Yeah, it’s great.” I was only mildly buzzed and it did indeed feel very nice, but I knew I was never going to come. “I have a hard time getting there. It’s not you.”

“Well, tell me if you want to stop or do something different.” She was sweet and cute and I should have been able to come, but it wasn’t happening.

We heard the front door open and close and then a shouted hello.

“Anyone home?” It was Marilyn. I was awash in fear. Tory jumped up and threw on her clothes. So did I, but it didn’t matter, we were busted.

We were in the midst of a tense, chain-smoking three-way discussion when Chris arrived around nine that evening.

“Are there leftovers? I smelled something really great when I opened the door.”

Chris made up a plate for himself and sat down at the table.

He looked around at the three of us, picked up on the vibe, and asked, “What’s going on, girls? You look like someone’s pet died, and we don’t have any pets.”

Marilyn was rocking in her chair with a cigarette in her hand. Tory was staring at the table. I was wondering if I ought to pour another glass of brandy. No one said a word. Chris chewed and waited.

“Well, if you must know, she fucked my girlfriend.” Marilyn flicked her head at me.

This was infuriating. What happened to the “open relationship”?

Tory said through her teeth, “It was your idea to see other people.”

“I never thought it would be Max. That’s classless.”

Chris watched the verbal tennis game as he ate.

“We didn’t do anything in our bed,” Tory said, as though that would mollify Marilyn.

“Whoopee shit. You think that gets you off the hook?”

“I think we might want to leave these two to work this out,” Chris said,” Come on, Max.”
We went to his room.

“Have you never heard the saying, ‘Don’t shit where you eat’?”

“That’s disgusting,” I said peevishly, though I took his point and didn’t want to admit it.

“Not as disgusting as you’re making it with our roommate who’s the lover of our other roommate. You have the worst judgment.”

“This from a guy who lets anyone with a pulse screw him.” I was not in the mood for him judging me. Mr. STD himself.

“We’re not talking about me, sweetheart, and I keep it out of the house. You just created the biggest dyke drama of all, the triangle. You are probably going to get us kicked out of here.”