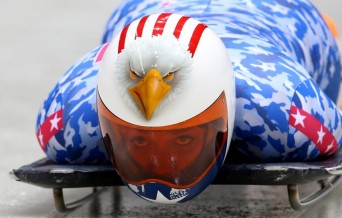 As the Olympic flame ignites in Sochi, many Americans are vowing to turn away from the light. They’re refusing to view the Olympics due to the heinous persecution of gays or the killing of stray dogs or the unethical treatment of political dissenters. I understand the outrage. I feel the outrage. But, turning the channel in protest is ineffective and unfair to the young people who’ve worked so hard for this moment.

Do you think Russia really cares if you sit at home and binge watch “Orange is the New Homeland” on your tablet?

In the meantime, some 19- year-old, whose hopes and dreams have been set on these next 2 ½ weeks will not get the appreciation they deserve.

I understand the depth of feeling. I’m gay and an animal lover and if someone hurt my cats, I’d slice them up with a figure skate and use their disgusting carcass as a bumper at the end of the bobsled run. (All the while wearing rainbow colors and singing “We Are Family”). And, I certainly do not make light of what’s going on there.

Yes, the world should protest but “not watching on TV” is not taking the appropriate people to task. It’s not accomplishing anything. Russia does not care if we don’t watch! It’s only hurting the young people who’ve devoted their lives for an opportunity to represent our country.

Let us also not forget that these U.S. citizens are walking into Terrorist Central in Sochi. They are risking their lives to proudly wear our stars and stripes. When they passed up all those summer camps with friends or sleepovers or “normal” childhoods, they did so with the thought that, one day, the rest of the country would see our flag raised and hear our national anthem because they, in that moment, were better than anyone in the world — even the Russians.

Yes, a few of them will make a lot of money with endorsements. We all know the Shaun Whites, Apollo Ohnos and Michelle Kwans. But the vast majority of those athletes will not get to tell us to “eat fresh” on TV. This is their moment. This is their reward. This is what they’ve been living for. They deserve our support. They deserve to know we are watching them.

We need to do something about what’s going on in Russia. Donate money to organizations that fight for human rights across the world. Write you congressmen. Hell, even tweeting something spreads the word. But, sitting at home, turning the channel and drinking Tequila instead of Vodka aren’t accomplishing anything. NBC has already sold the ad time. They don’t care.

As for Putin, that’s just fewer people watching and complaining about the way he does things. He won’t care. Not watching will not solve anything — unless you use the time to train and qualify for some event in four years. And, then, wouldn’t you want your fellow citizens cheering you on?

Please, watch our athletes. They will be awesome. They may or may not win but they will give 110 percent — it’s who they are as Americans. You know what else they’ll do? They will make you proud. I bet some will even find some creative way to voice their protest but, if you’re not watching, you won’t see it.

Jennie McNulty was named one of Curve magazine’s Top 10 lesbian comedians. She can be heard weekly as co-host of LA Talk Radio‘s “Cathy Is In: The Cathy DeBuono Show.”