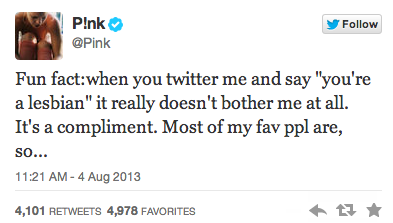 Pink was attacked on Twitter and called a “lesbian” after she performed with a gay pride flag at a recent concert in Australia. During a stop in Sydney over the weekend, Pink danced with a rainbow flag draped around her shoulders after grabbing it from an audience member in the front row.

Some tweeted at Pink, calling her a lesbian, Towleroad noted. But the 33-year-old was unfazed by the hateful chatter.