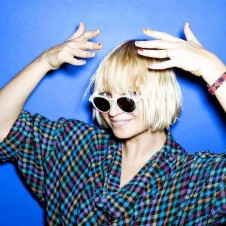 Australian pop hit maker Sia Furler — known simply in the pop world as Sia — caught a bit of flack from the LGBTA community for appearing as a guest on rapper Eminem’s newest album “Marshall Mathers LP 2.” The openly bisexual singer (whose songwriting credits dance from galactic hits like Rihanna’s “Diamonds” and the Shakira track “She Wolf” to the “Twilight Saga: Eclipse” and “The Great Gatsby” soundtracks) is featured in a bonus track on “Marshal Mathers.”

The song, titled “Beautiful Pain,” is a glossy hip-hop/pop ballad, which shows a more emotional and self-improving side from the rapper that isn’t often on public display. With Sia’s dark, soaring chorus: “Standing in the flames it’s a beautiful kind of pain, setting fire to yesterday,” the emotional ante is taken to a level beyond what “the real Slim Shady” usually conveys.