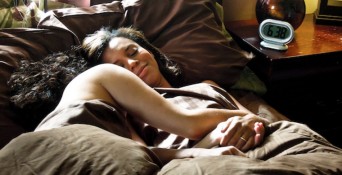 Award-winning writer and filmmaker, Caryn K. Hayes joins a host of other indie directors taking a stab at online distribution.

On August 22, Hayes released her acclaimed narrative short, “Clean Hands,” as a digital download and streaming rental, making the film directly available to her fans and lesbian cinephiles alike.

The New Orleans native (now Los Angeles resident) premiered the short earlier this year at the 2014 Pan African Film Festival before taking it through the film festival circuit with screenings at The Miami Gay & Lesbian Film Festival and the Women’s International Film & Arts Festival.

“Clean Hands” follows Anna and Kirsten, a married couple who are caring for Anna’s terminally ill father, Paul. Anna is a woman who is always stuck in the middle — between her homophobic father and her wife, her Christian beliefs and her sexuality — and she is constantly under pressure from all sides. After Paul dies, Anna goes through a tailspin of grief and pain, and Kirsten’s attempts to help are rebuffed. When Anna emerges from her spiral, will her rock in the storm be washed away?

A graduate of Xavier University in Louisiana, Caryn Hayes has been writing fiction since grade school and is a published author.

The renaissance woman is also a two-time winner of the TV Pilot Award in the original script competition presented by the Organization of Black Screenwriters for “The Ridge” in 2007 and “Dirty Thirties” in 2009.

In the spring of 2008, Hayes began producing her own work under her multimedia production company, Hardly Working Entertainment. Her first comedic digital series, “The World of Cory & Sid,” was nominated for Best Television or Web Series in 2009 by the Urban Mediamakers Film Festival.

She received an Outstanding Writing in a Drama Series award for her second series, “Breaking Point,” from the 2011 Los Angeles Web Series Festival. To date, “Breaking Point” has been nominated and awarded over 20 times, including nods for Best Drama and Best Directing from the 2012 International Television Festival. Her most recent web series, a relationship dramedy dubbed “Entangled With You,” has already won five awards.

Be it her signature of sorts, Hayes clearly has a natural propensity for drama, particularly the kind gravitating towards relationship.

Whatever hat she is wearing, filmmaker, writer or producer, she has certainly carved for herself a successful career, cementing her status as a voice to be reckoned with in the lesbian film community.