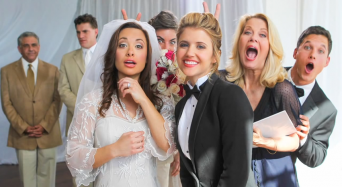 SHE4ME, the marriage equality PSA, has been officially selected to screen at IMMAGINARIA, A day of independent lesbian movies (Rebels, Lesbians, Eccentrics…”) at the International Women’s Film Festival in Roma, Italy, on May 31.

The organizers of the event SCREENING THE GIRLS, Lista Lesbica Italiana (LLI) and Fuori Salone delle Lesbiche/Lesbians Outhall n.4, were thrilled to include SHE4ME directed by the multiple award-winning Nicole Conn and set to the Jen Foster song “She”, in the festival.

IMMAGINARIA have been supporters of Nicole Conn since her groundbreaking 1992 film “Claire of the Moon”, which was screened in Bologna. A decade later Conn’s “A Perfect Ending” (starring SHE4ME’s Barbara Niven) was selected and screened at the IMMAGINARIA festival in Milano.

The video opens up to a beautiful wedding, where viewers witness a celebration of love between family, friends and guests. The viewers are taken on a journey through exquisite flashbacks of the bride and her best friend in their youth. We witness an underlying tension during the present day wedding before being presented with an endearing plot twist. The twist has been designed to help transmit a hopeful message of love and understanding to a mainstream audience, thinking of those with opinions somewhere near neutral on gay marriage.

SHE4ME is all about love. About how underneath it all, Love is Love and, to coin a lyric from the song SHE “there is nothing to be afraid of.” This video shows a face that people need to see, the face of unconditional love. With the help of YouTube and hundreds of volunteers, partner organizations, SHE4ME is expected to reach millions of people all around the globe, especially in places where LGBT people are not accepted.

Brian Silva, Executive Director for Marriage Equality USA says: “Music and video projects like this have the power to impact millions of viewers by showing the love and commitment that is celebrated and protected by passing civil marriage equality for LGBTQ families.”