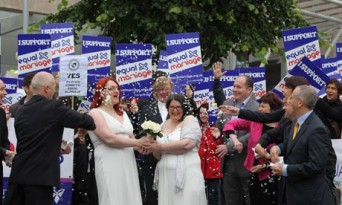 Jaye (left) and Ruth Richard-Hill from Glasgow, in a mock marriage ceremony outside Scottish parliament in Edinburgh (Photo: Andrew Milligan/PA)

Scotland legalized gay marriage on Tuesday, becoming the 17th country to do so.

The Scottish Parliament passed The Marriage and Civil Partnership Bill by a whopping 105-18 margin, according to multiple sources. Scotland’s first same-sex marriages could happen this year.

“We’re doing a remarkable thing today, we are saying on behalf of Scotland to the world, loud and clear that we believe in [recognizing] love between same sex couples as we do between opposite sex couples,” Scotland’s Health Secretary Alex Neil said, according to the Daily Record.