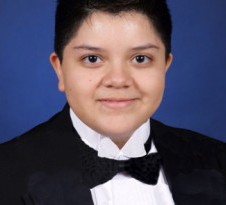 When Jeydon Loredo, a transgender student at La Feria Independent High School near the Texas Gulf Coast, wore a tuxedo for his high school yearbook senior photo in September, the school principal told him it wouldn’t be included because it violated “community standards.”

The Southern Poverty Law Center, a civil rights group, on Wednesday threatened in a letter to sue the school district in federal court unless it allows Loredo’s tuxedo picture in the yearbook.