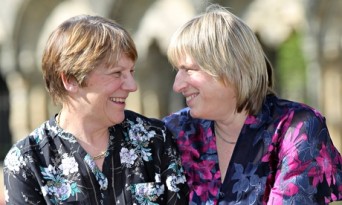 Sue Wilkinson and Celia Kitzinger were among the first to have their marriage legally recognized in England after
previously marrying overseas.

Same-sex couples across England and Wales were celebrating at the stroke of midnight Friday as gay marriage became legal.

British Prime Minister, David Cameron, said the reform was necessary because “when people’s love is divided by law, it is that law that needs to change,” adding that the change sent a “powerful message” about equality in Britain.

While many rushed to secure the title as first couple to wed after the law took effect on March 29, others saw their previously performed overseas marriages become legally binding earlier in the month when the new law enabled couples to register their intent to marry under the Marriage (Same-Sex Couples) Act.

Among those who saw their overseas marriages legalized on March 13 were Sue Wilkinson, 60, and Celia Kitzinger, 57, who were married in Canada in 2003 and fought for eight years to have their union recognized at home.

In celebration, the couple cracked open champagne and put on the wedding rings they had not worn in England since losing their high court battle for recognition eight years ago.

“At midnight (on March 13) we were just by ourselves at a secret romantic hideaway deep in the country, and we actually opened the window of our room and we heard the bells of the local church ringing midnight,” said Wilkinson. “And when the church clock went ‘bong’ we put on our rings and opened a bottle of champagne. It was just magical, special, lovely.”