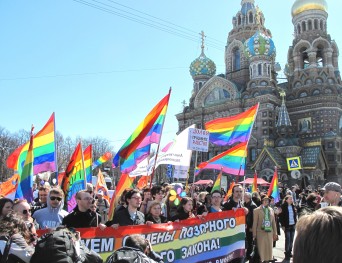 In the latest chapter of Russia’s continuing saga of homophobic legislation and anti-LGBT violence, Dmitri Kisilev, Deputy General Director of the Russian State Television and Radio Broadcasting Company, recently slammed the gay community on the country’s most popular news program.

Speaking on Rossiya 1, a state-owned news network, Kisilev stated that:

“I think that just imposing fines on gays for homosexual propaganda among teenagers is not enough. They should be banned from donating blood, sperm. And their hearts, in case of the automobile accident, should be buried in the ground or burned as unsuitable for the continuation of life.”

The statements were met with resounding applause from the audience.