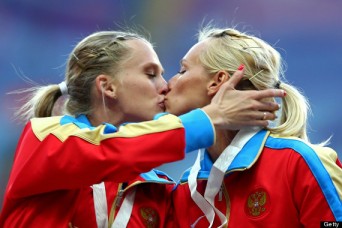 After winning the 4×400-meter relay at World Athletics Championships Saturday, runners Tatyana Firova and Kseniya Ryzhova shared a kiss. Then the gold medalists kissed again during the award ceremony. While some speculated that the Russian athletes’ kiss on the winners podium was an apparent jab at the country’s anti-gay law, local media questioned whether it was a political gesture or simply a congratulatory embrace.

Neither athlete has released a statement, so the kiss may have been just that — a kiss. However, as Gay Star News notes, the Russian athletes’ kiss does violate the anti-gay law passed by Russia’s parliament earlier this year. So the two women could, theoretically, be prosecuted for their public lip-lock, since it could be perceived as propagating non-traditional sexual relations.