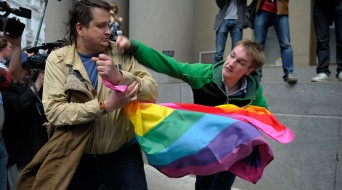 Russia’s lawmakers say gay people are such a threat to children that there is a need to ban transmitting knowledge of homosexuality in the public sphere, and the Duma has now passed a bill to that effect.

The law received a 436-0 on Tuesday, July 11, with just one deputy abstaining from voting on the bill.

With approval by the upper chamber and President Putin appearing to be just a formality, activists warn that this effectively is a return to Russia criminalizing gay identity. The legislation bans the promotion of ”propaganda of non-traditional sexual relations” to minors.