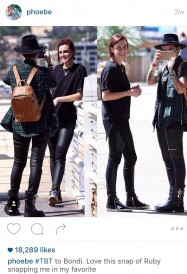 Phoebe Dahl, designer and granddaughter of children’s author Roald Dahl, announced today that she and DJ/model/actress Ruby Rose have called off their engagement and are no longer a couple. Dahl chose to announce the statement to U.S tabloid, Us Weekly.

“After two wonderful years together, Ruby and I have decided to part ways. While we still love each other and support each other in every way, it is our mutual decision to part ways. Our break is not the result of any media speculation and we want nothing but the best for each other. Thank you for respecting our privacy in this very difficult time.”

Dahl and Rose have been engaged since March  2014. As recently as three weeks ago, Dahl was still posting pics of her and Rose. Rose seems to have deleted most of Dahl’s presence from her social media accounts. So heartbreaking!