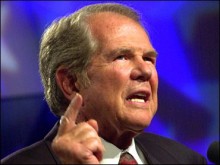 Right-wing televangelist Pat Robertson thinks Democrats are committing political suicide with their decision to stand up for the civil rights of the LGBT community.

Speaking on his television program on Tuesday, Robertson said the Democratic Party has a “death wish” in backing marriage equality as part of its official platform, which will be unveiled at this summer’s Democratic National Convention.