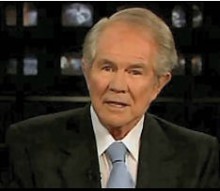 Pat Robertson has joined the chorus of those condemning Chick-fil-A’s pro-LGBT rights protesters, challenging them to “to bring forth a baby from that part of the anatomy which they concentrate on.”