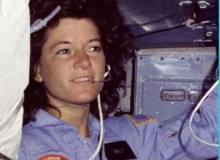 Dr. Sally Ride was a lot of things. A renowned astrophysicist, a heroine to little girl science geeks everywhere, and also the first American woman in space. She was also a devoted same-sex partner. Many have said the fact Ride was a lesbian didn’t and shouldn’t matter. Except that it does matter in at least one very important way: Ride’s partner is today denied the benefits a surviving heterosexual partner could have received.

It wasn’t widely known that Ride was a lesbian, and indeed she never officially came out to the public, preferring instead to let her legacy as the first American woman in space stand without any other qualifiers or adjuncts. Since her death last week however, much has been discussed about the fact that Ride was in a same-sex relationship with Dr. Tam O’Shaugnessy, her partner of 27 years.