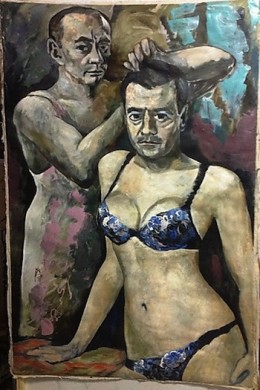 This painting by Konstantin Altunin was seized from a St. Petersburg gallery.

Disturbing news from Russia tells that flyers are now being posted encouraging people to denounce those they suspect of spreading “gay propaganda” and that Russian officials have started raiding the homes of human rights activists. Other reports have suggested that Russian landlords have begun posting signs encouraging neighbors of people they suspect to be gay to inform on them.

In somewhat related news, police in Russia also recently seized from a St Petersburg art gallery a painting depicting President Vladimir Putin in women’s underwear combing the hair of Dmitry Medvedev, Russia’s Prime Minister. The police seized in total four paintings, another of which depicted St Petersburg lawmaker Vitaly Milonov, a key architect of Russia’s propaganda laws, against a rainbow background. The artist of the works, Konstantin Altunin, has reportedly fled to France in order to seek asylum.