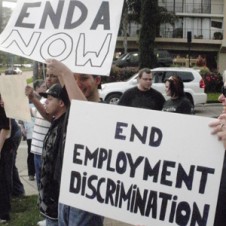 Many studies have shown conclusively that the LGBT community as a whole does in fact need the protection of a federal nondiscrimination act; a report released on November 14, “A Broken Bargain for LGBT Workers of Color,” uncovers the reality that some workers need it even more than most.

The report, a collaboration between the Movement Advancement Project (MAP) and a dozen other civil rights organizations, compiles a number of statistics showing that that LGBT workers of Spanish decent are some of the most disadvantaged in the US. Poverty and unemployment rates are extremely high among that segment of the population due to multiple disadvantages; regardless of orientation, people of color in America often have the odds stacked against them, but being gay, bisexual, or transgender only adds to it. Transgender Latinos are most likely of all to be extremely poor; in the general population of the Latino community, 5 percent live in extreme poverty, while among transgender Latinos, it’s 28 percent.

The report follows its pages of statistics analysis with recommendations: pass legislation to eliminate or reduce educational barrier in schools, bias and discrimination in the workplace, and secure equal pay and benefits for LGBT people of color.