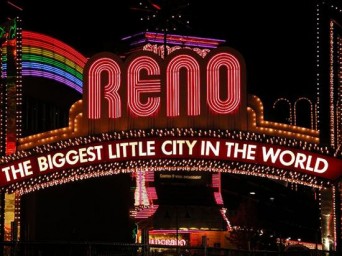 Reno is known for many things, but having a vibrant art scene isn’t typically one of the Biggest Little City in the World’s claim to fame, yet it is catching art aficionados on the hunt for emerging talent or simply art admirers casually touring the town off guard and leaving them pleasantly surprised.

Priced out of traditional art centers in major metropolitans such as Los Angeles, New York, and San Francisco, artists are finding homes and much needed support in mid-size cities, like Reno, and transforming them.

Reno is growing into a vibrant artists’ community offering artists and art enthusiasts a variety of artist work-live spaces, co-op galleries and studios, galleries, a museum, art organizations, and events mostly centered in the Arts District along the Truckee River.

Located at the foot of the Sierra Nevada Mountains, Reno, an old gold and silver mining town that turned into the original “Sin City” — but has long been overshadowed and out done by its more glitzy sister to the south, Las Vegas — has been undergoing a revival for the past five or more years. Much of the revival can be attributed to the artist revolution and Burning Man, which sets up camp just outside of Reno during Labor Day weekend, but the city is also making a concentrated effort to change the past image of the rugged West mining town and bus loads of seniors inhabiting the worn out seats in front of the slot machines.

Artopia
The city is home to an estimated 35 art galleries, not including the five galleries at the University of Nevada at Reno, and two museums.

Reno has become a welcoming place for artists to live and create that has been attracting dancers, painters, photographers, sculptures, and more from all over the United States to the area.

In addition to the variety of places to show their latest works, artists have found a home, literally. For more than a decade, artists have lived in 35 one, two, and three bedroom affordable live-work lofts at Artspace developed by Artspace Projects, Inc. and the Sierra Arts Foundation that was approved by Reno’s Arts and Culture Commission.
Artspace Projects, Inc. is a real-estate developer that has repurposed 22 buildings around the United States for artists to live and work in. The Sierra Arts Foundation is a local organization that promotes art education and supports artists.

Bonuses for the artists are that they get to live in the historical landmarked hotel designed by prominent architect Frederic J. DeLongchamps built in 1926 that overlooks the Truckee River in the Arts District.

Reno isn’t leaving art up to the adults, clearly, the Holland Project (122 Ridge Street, Suite B, 775-742-1858, hollandreno@gmail.com, HollandReno.org) is a youth led art and music project located in mid-town Reno. Young artists produce art and music shows along with learning about art and music through workshops, community service and activism.

Creative explosion
Reno’s art scene is on fire in June through August starting with NadaDada Motel art event, a weekend long event where Reno artists take over local motels to exhibit their works. NadaDada was this past weekend, but its only the start of Reno’s art season.
In July, Reno is Artown, produces up to 400 plus events throughout the month.
At the end of August and in early September, Burning Man sets up camp just outside of Reno. The following weekend in September, artists throw open their studio doors one last time for Open Studios.

Art path
Art explorers can learn about Reno’s art scene anytime of the year by venturing out to many of the galleries and museums that are located in the heart of old town Reno. The renovated Truckee River Arts District along the Truckee River makes it easy to bike or walk to tour the city’s creative treasures. Officially, the district stretches from Idlewild Park in the west to Lake Street in the east, and from California Avenue on the southern end to West First Street in the north. A map of the district can be downloaded, here. 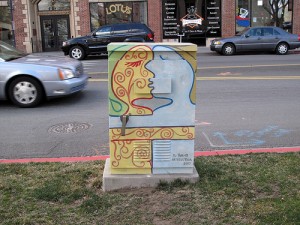 “The Mona Lisa” on of Reno’s public sculptures (Photo: Courtesy of nileguide.com)

To check out the art scene, several tours of artists’ studios, galleries, and museums are available. Artouring, a part of Reno’s Open Studios, offers a walking tour that takes art enthusiasts behind the scenes into artists’ studios in Reno-Tahoe region. Reno has a growing public art collection that can be viewed by walking around the city or by taking a walking tour of the city’s public art collection presented by the city’s Arts and Culture Division (775-825-9255 or 775-334-2417, info@renoriver.org). Reno Public Art Walking Tours takes guests along one of two tour routes (guests can view the artworks at the Downtown Collection or the ReTRAC collection) during the 50 minute tours that begin at the City Center Plaza, across from City Hall, (N. Virginia and 1st Streets) on the first Friday of the month.

Another option for a guided tour for Reno visitors in the city at the beginning of the month, you can catch the monthly Artwalk in the District presented by the West Street Market and the Riverwalk Merchants Association that runs from the beginning of spring through the end of fall. Artwalk in the District is the right price, free, every first Thursday of the month from 4 p.m. – 9 p.m. Be prepared to dance, the walk will be filled with food, drink, live music, and salsa lessons. A guide can be picked up at a number of Riverwalk or West Street Market merchants.

Art affectionados can develop your own tour of Reno’s creative scene and either bike, walk, or catch the Sierra Spirit (a free shuttle service that runs from the University of Nevada, Reno and the Truckee River Arts District).

Art by bicycle
While Super G was off teeing off on one of Reno’s 100 golf courses, I opted to create my own tour of Reno’s art scene by bicycle. There is nothing like a casual bike ride checking out local artwork on a sunny day.

It is the best way to get around old town Reno, in spite of a lack of bike lanes and racks, the ride is worth it.

I checked out my bike that I brought from San Francisco, Calif. from the bell desk at the Silver Legacy (407 N Virginia St., 775-325-7401, SilverLegacyReno.com). If you don’t want to bring your own two wheels, you can rent a bike at Sierra Adventures at the Silver Legacy Resort and Casino’s Adventure Desk. 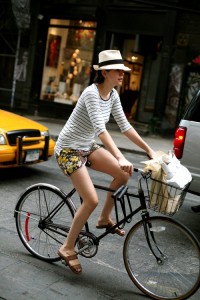 Be prepared to pay to enter museums and to make a small donation to some of the smaller museums. Most artist co-ops and galleries are free to enter.

My first stop on the tour, the Nevada Museum of Art (160 W. Liberty St., 775-329-3333, NevadaArt.org) a short six minute ride from the Silver Legacy. I parked my bike at the bike rack at the back of the museum’s parking lot.

I was surprised by the myriad of artistic samplings from around the world and local California and Nevada artists on display at the museum, the oldest cultural institution in Nevada. The museum recently launched a long-term collaboration with New York’s El Museo del Barrio, with the exhibit “Voces y Visiones” running through July 7. The museum is also showcasing “A Real Van Gogh? An Unsolved Art World Mystery” running through August 25; the “Amerique Powell: Explosions and Possibilities” running through September 1; and “Erika Osborne: The Back of the Map” running through November 17, to name a few of the exhibits currently on display. The traveling exhibits are only a portion of the museum’s offerings. Its highlights are its collection of local and regional artists.

Before leaving the museum, I grabbed lunch at Café Musee downstairs at the museum and checked out the shop. Café Musee is a great lunch spot offering up gourmet sandwiches and soups.

Leaving my bike at the museum, I walked around the corner to Arte Italia (442 Flint St., 775-333-0313, ArteItaliaUSA.com), an Italian art museum that also has an Italian culinary art institute at the Joseph Giraud House. It was a surprise to discover this museum in the turn-of-the-century Colonial Revival style as it was a gem that wasn’t on my list, but suggested to me by a woman at the front desk at the Nevada Museum of Art.
Italy enthusiasts will enjoy the United Nations Educational, Scientific and Cultural Organization Italia, a photographic tour of Italy’s 47 World Heritage Sites running September through November I happened to catch the “Michele Cascella — Un Pittore Senza Tempo” exhibit last fall, but the museum has been closed during other visits where I attempted to see “Beauty and the Beasts”, “Titans of Venice”, and other shows. It is a museum definitely not to be missed while in Reno.

I returned to NMA grabbed my bike and headed up the street and around the corner heading towards the river to the VSA Nevada at the Lake Mansion (250 Court St., 775-826-6100, VSANevada.org). The gallery displays artwork created by disabled individuals in the rooms including the sitting area and the parlor on the first floor of the historic mansion, which was moved several times before settling into its current location. There are a wide variety of works from acrylic and oil paintings of abstract and landscapes to ornaments to pottery, and more. The quality of work is quite high with some rivaling intermediate and advanced artists’ works. Pieces of artwork can be purchased off the floor and 100 percent of the proceeds go directly to the artist.

Upon leaving VSA Nevada, I headed toward the river to Sierra Arts (17 S. Virginia St., 775-329-2787, Sierra-Arts.org). I parked my bike in front of the Wild River Grille (17 S. Virginia St., 775-2847455, BestRenoRestaurant.com), where there was a bike rack. The gallery is an eclectic collection of paintings and photography, but leans more towards photography by emerging artists. I was quite pleased by the photography and the fact that a good number of the artists on display were women.

After wandering around the gallery it was time for me to head back to the hotel to meet Super G to get ready for dinner at the 4th Street Bistro, Reno’s first class restaurant that prompts locals to oooh and aaah any time it is mentioned.

It was a perfect ending to a day of art and great food and drinks in Reno.