It’s the return of our February love special, Real-Life Love Stories. Want to share your love with the world? Read our submission guidelines.

Meet Ruth and Michelle, who found love in a surprising place.

I rarely read the Craigslist women-seeking-women posts. Most of them seemed to be written by women who were home alone for a few hours and just wanted to fool around. Still, that night eight years ago, for some reason I couldn’t explain, I clicked on them. When I entered the key word “spiritual,” it eliminated 99% of the ads. And there she was. 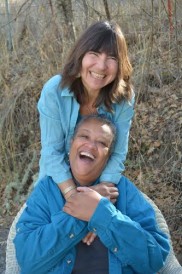 Her ad had a cheesy title – “Are You Out There?” But she was in my age range and nearby so I clicked to read it.

She was looking for someone who, like her, placed spirituality at the center of her life. I was a spiritually-oriented therapist. She mentioned that on some days she identified as butch, but on other days “I find labels problematic.” I’m femme-of-center, but have been called “butch in the sheets. ” I was a poet who’d published three books of poems; she said that the woman she sought “would bring at least three books on an outing to the beach, including a book of poems.”

She would be my next partner. There was no doubt in my mind.

“Be prepared to have an engaging email correspondence before meeting,” she’d written. And indeed we started one. Soon we were emailing each other long letters two or three times a day. She told me about the time she ran away from home at 13. I told her about my sister’s mental illness. She told me that her first partner had been abusive to her. I told her about the breakup that had shattered my heart, and how it had led me to change my life and become a healer.

Two weeks later, when I walked into the café where we were meeting, I spotted her right away. She was a tall woman with a slightly ungainly gait, and the sweetest face I’d ever seen. We sat at a table by the window and sipped our tea long past the time when it went cold. It seemed we would never run out of things to say!

I was used to meeting perfectly nice women, but feeling nothing for them. This time it was different. I was moved by Michelle – her brilliance and her vulnerability, both. Disappointed when she said she had to leave, I walked her to her car. Later she told me she’d watched me walk away down the street, thinking, “I like that woman!”

Does God(dess), or the great Lesbian Matchmaker in the sky, make use of the internet? I’m quite sure she does. I found out later that Michelle’s personal ad had come to her mind, fully written, one afternoon while she was meditating. Good meditator that she was, she gently pushed it away. But when it came back again the following day, she sighed, opened her laptop, typed it in, posted it, and then went back to following her breath.

The very next day, I “just happened” to check the Craigslist ads for the first time in years.

It’s been almost eight years now, years of a lot of change. We moved cross country together; we moved back to California again. We’ve seen each other through illness, financial struggles, life coaching and family crises. Through it all, our connection to each other has only grown deeper.

The first thing most people notice is that Michelle is Black, and I’m white. It’s never been an issue for us. Sometimes we like to say we come from the same home planet.

Neither of us ever wanted to have children, but we’ve both strongly motivated to help others. Michelle’s background is in Neuroscience; she attended seminary, and has had a Buddhist meditation practice for 20 years. I’m a therapist, healer and writer. Between the two of us, we’ve taught at seven universities, and published 14 books. But our life experience, and our years of painful relationships, have been our greatest teachers. We feel we’ve discovered the tools for happy, healthy love. To share this with the world, together we’ve launched “Conscious Girlfriend: Your Path to Happy, Healthy Lesbian/Queer Relationships.”

Looking for your real-life love story? OneGoodLove.com is the leading online dating site created specifically for the relationship-minded LGBT community by the LGBT community. We understand how challenging finding love can be so find LOVE now.