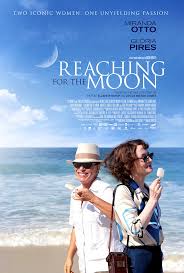 An intimate snapshot of the search for inspiration, the film is based on the true story of Pulitzer Prize-winning poet Elizabeth Bishop (Otto), who travels to Brazil where she encounters the beguiling architect Lota de Macedo Soares (Pires). Initial hostilities make way for a complicated yet long-lasting love affair that dramatically alters Bishop’s relationship to the world around her.

Watch it here on Lesbian.com: Reaching for the Moon