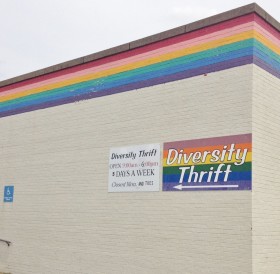 Meet Queer Abby, our new advice columnist, feel free to ask her anything in the comments below or write to her directly at abagailwaller@gmail.com.

There’s just something about Christmas. I can’t deny it…I don’t try to. I really do love it.

Christmas fervor is a force stronger than me and it really makes no sense. I mean, work is a thousand times busier, it’s colder than a snowman’s balls outside, and I’m more broke than ever.

Still though, I find myself wanting to decorate my home as if Christmas lights boned like bunnies and their offspring perched themselves on every hook, ledge, or surface throughout my house. I want to wrap presents while drinking hot cocoa, watch Christmas movies and listen to holiday music on vinyl that I scored from thrifty spots around town.
And that right there is the thing I might love most of all — Every year my family and I get together for what we call “A very Thrifty Christmas.” Basically, we all get together on Christmas day just like millions of families across the country, but instead of giving each other iPads, SUVs with giant bows on top, and other stuff we can’t afford…we give each other handmade items or items scored from thrift stores.
I’m a big fan of thrift stores – what’s not to like?

So, every “Thrifty Christmas” I like to get thrifty with it. You literally have no idea what you’ll find. The holidays shouldn’t be about fighting some soccer mom at Target for the hottest toy of season to give to your kid who’ll appreciate it for three weeks and then decide they want a laptop instead. It should be about family. It should be about laughing, having a good time with the ones you love, and just enjoying being around each other.

So, pass the eggnog…actually, no don’t, eggnog is totally gross. Make me a sparkling cranberry cocktail and put on The Santa Claus or Elf. I’ll snuggle under a blanket with my lady and then head out to treasure hunt for the perfect thrifty Christmas gifts.