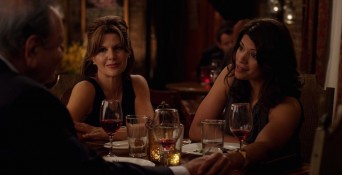 “Once Upon a Time in Queens” is the movie critics are buzzing about. The David Rodriguez penned flick stars Paul Sorvino as a former mob kingpin, who was recently released from prison and Renee Props, as the lesbian daughter who wants to reconnect with her dad after his 20 year absence while helping him navigate a world he no longer recognizes. Props has had a long, prolific career in Hollywood and brought her A-game to playing Rita Scoleri. I met with Props to discuss her role as Rita, the humanity at the core of “Once Upon a Time in Queens” and LGBT civil rights.

First, I have to ask you, do you still get people who recognize you from your role as Lois on the classic, “The Race,” episode of Seinfeld?

Yes, I do, thanks to re-runs. “Seinfeld” is like “I love Lucy,” it just keeps going. Jerry Seinfeld and Larry David are so clever. I hear my line from Seinfeld fans quoted frequently, “Race him! Jerry, race him!”

You’ve been vocal in your critique of the way “Once Upon a Time in Queens” is being marketed. Why do you think the lesbian storyline isn’t being marketed in the trailers for the film?

I am a straight woman who is an advocate for gay/civil rights. Producers Andrea Kelly and Kevin Kelly cut a great trailer when it was originally entitled, “Last I Heard,” depicting the film David Rodriguez wrote — a post-mob, slice of life, human-interest family drama.

I saw the new marketing trailer (by Lionsgate) and I was shocked. They tried to make it look like a mob film and it is quite the opposite. I think Lionsgate is missing the boat. In a day and age with technology changing every minute and we are living in “real” time. It is vital to understand everything is transparent now. The cream always rises to the top and people are hungry for truths that compel them to grow and cope.

We know your character, Rita, is a lesbian, but what are some of her other attributes and what do you think will inspire viewers to relate to her?

Rita loves her father and has worked very hard to forgive him for many choices he has made in his life. She is also a strong woman and will not compromise her own inner truth. I think most gay children want to mend the bridge with their parents, but also understand they must be steadfast in who they really are and hope they are loved for that.

You were born in Oklahoma and raised in Arizona, how did you prepare to play a Queens girl?

I had the privilege of living with a Queens family, The Panepintos’ for six weeks before shooting so I could really absorb the culture and the people. They are as tight as a family gets; there is great love, commitment and loyalty. My character was raised old school Catholic. An actor does not always get that luxury for character development, so I am so thankful. I also met some new, lifelong friends.

Did exploring her relationship with her father, played by Paul Sorvino, during the film lead you to draw any parallels with your own life?

Oh of course! I lost my dad to brain cancer when I was 16 years old. So I related to Rita losing 20 years of her life with her dad, when he was in prison.

In traditional “mob” movies, women are usually old grandmas or hot girlfriends or long suffering wives. How does Rita subvert these tropes? Do you think that traditional “mob movie” fans will react favorably to her?

I think the stereotypical woman in every genre of art needs to be broken, changed, explored and shared.

What is the ultimate message that you want viewers to take away from “Once Upon a Time in Queens?”

If one old school parent sees this film and starts their journey to learn to love their gay child unconditionally, then this storytelling has fulfilled part of its main purpose.

One last question, does Rita get any on-screen action?!

You are so funny! There is not a love scene between Rita (Props) and Anna (Andrea Navedo) but if there was … it would have been hot! Navedo is gorgeous, as you can see in the popular TV series, “Jane the Virgin!”

Watch “Once Upon a Time in Queens” on VOD, DVD and iTunes. It’s available now!