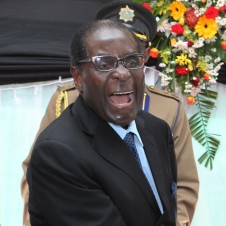 President Robert Mugabe of Zimbabwe has announced at his daughter’s wedding that, as he was just informed that there are LGBT people in his country, he wants to “check on who is in that group.” According to Towleroad, he “has an extensive history of fiercely anti-gay remarks”—including a statement that since two men cannot make a baby, they should be decapitated.

Adding to the unlikelihood that Mugabe was genuinely ignorant of the existence of the local LGBT community, the Gays and Lesbians Association of Zimbabwe (GALZ) has been active in the country for years—and a case brought against it by the Zimbabwean government itself was thrown out only days before his speech.

Mugabe also marked his eighty-eighth birthday party with a speech telling LGBT people to “go to hell,” and his ninetieth urging citizens to reject homosexuality.