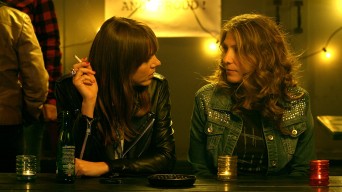 BY FRANCESCA LEWIS
Lesbian.com
I’m a sucker for two things – navel-gazing and complex female characters. Throw in a little self-deprecating wit and I’m there with bells on. So new Canadian indie movie Portrait of a Serial Monogamist was kinda made for me. It tells the story of Elsie – or, more accurately, she tells her own story, through narration and direct-to-camera dissection of the scenes that unfold. Elsie, a music journalist working for a TV station, is in a long-term relationship with performance artist Robyn, and she’s ready to move on. She has a patented method for breaking up – this ain’t her first rodeo – which involves cushioning the blow as much as possible and then getting the hell out of dodge. The film deals with her journey towards personal growth, as she takes advice from various friends in an attempt to change her serial monogamist ways.

Inspired by both hip comedy High Fidelity and darkly comedic Michael Caine movie Alfie, both of which feature not altogether lovable male characters communicating directly with the camera, the film was written and directed by Christina Zeidler and John Mitchell. They told me Elsie’s choice to talk to the camera had a very specific intention,”What was interesting to us was a central character who feels the need to talk directly to the audience in order to rationalize their behaviour,” says Mitchell, “partly to keep us on their side, and partly because they don’t get it. What Elsie says and what she does are two different things. Elsie’s fatal flaw is that she lives in denial of the consequences of her actions.”

Elsie’s beautiful rogueish complexity and clueless self-involvement are made completely relatable and hilarious by the subtle realness of Diane Flacks’ performance. Flacks told me she related to her character’s awkward humour and that, although she can’t help judging her, she has to commend her for trying,

What I found very refreshing about this film was how complex, often unlikeable, Elsie is. She is very flawed, in a way I think many women will greatly relate to, but she is also very human. This is not a cringe comedy saying ‘let’s all laugh at the horrible bitch’ – because we’re seeing it all through Elsie’s eyes, through her narration, and so it becomes a nuanced portrayal of a rounded woman.

“The movies tend to present us with a lot of black and white, saints or sinners, good or evil,” says Mitchell, “and of course in real life people are far more complex, which for us as writers was much more interesting territory to explore.”

“But the broader question,” says Zeidler, pointing out the sexist hypocrisy of Hollywood, ” is why will audiences accept bad behaviour from a male character – and so many films and television shows glorify the bad behaviour of men, to the point of violence – but a female character struggles with “like-ability” if she isn’t adorable…well..?”

The supporting cast in this film is awesome – and not just because it includes the pure bad girl hotness that is Vanessa Dunn of Vag Halen. Many of the cast, even those in small roles, are old friends and this shows in the ease of their interaction with each other. Flacks was able to work with the donor dad of her eldest son (David Gale) playing her brother. She also acted alongside her old friend Sabrina Jalees for the first time and “instantly slipped into some total sisterly dynamic” – which absolutely shows on screen.

“Dawn Whitwell, who plays Jackie, used to be the roommate of my wife and I.” Flacks told me, “In fact, when I went into labour with our eldest son, Dawn brought me toast at 5 in the morning – it was a bit too late to eat at that point, but god bless!”

Portrait of a Serial Monogamist is a Canadian film, set in Toronto, but the city is more than a setting – it is almost a character in itself and has huge thematic resonance in Elsie’s story. Flacks is a Toronto native and speaks very highly of the city,

“I love its coldness and its secrecy. Its self-contained neighbourhoods, each with their own vibe. I wouldn’t want to live anywhere else in Canada, no offence to everywhere else.”

Zeidler and Mitchell, who also both grew up in Toronto, decided to use the city as a metaphor for their central character.

Like the city of Toronto, seemingly “changing simply for the sake of change”, as Ziedler put it to me, Elsie is constantly taking a complicated girl, fixing her up, gentrifying her, and then moving on to the next characterful wreck. Only when she’s forced to stop doing this, and to instead think about putting down roots, working on her own stuff, does she begin to grow.

Portrait of a Serial Monogamist is a witty, cool and very human story – the story of one woman’s struggle to know herself, told in her own words. And we really do not see enough of that.

You can watch Portrait of a Serial Monogamist on Wolfe Video.