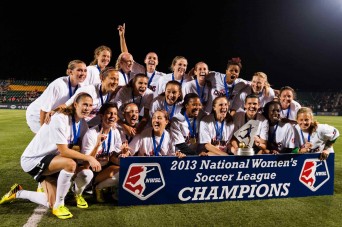 Tobin Heath’s decisive strike off a free kick in the 40th minute proved to be all the offense Portland needed to defeat Abby Wambach‘s Flash who ranked atop the league at the end of the regular season. Christine Sinclair added a second goal for the Thorns during second half stoppage time to crush the waning hopes of the home crowd in the final minutes of the match.

Recovering from a knee injury in early August, Alex Morgan didn’t start the game for Portland, but came on in the final 19 minutes and assisted on Sinclair’s goal.

Portland played most of the second half short-handed after Kathryn Williamson received her second yellow card in the 56th minute. Williamson was deemed to have taken down Wambach just outside the Portland penalty area twice in a nine-minute span.

Despite the advantage, the Flash couldn’t capitalize on scoring opportunities by Carli Lloyd and Vicki DiMartino late in the match.

Wambach, Morgan, Heath, Lloyd, and Rachel Buehler return to action with the USWNT on Tuesday night in Washington, DC, in a friendly match against Mexico.