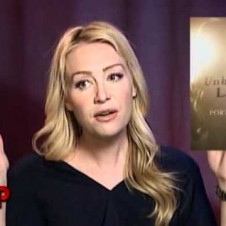 Portia de Rossi, in a revealing new interview this week on “The Conversation With Amanda De Cadenet,” opened up about her struggle to come to terms with her sexuality and her public coming out in 2005.

“I just didn’t want to be a lesbian,” de Rossi stated. “I’d never met one for a start and I just thought they were strange and that they hated men and they were very serious and I had these ridiculous images in my head and there were no out celebrities or politicians or anybody that I could look to and go, ‘Oh, I could be like that.’ There was nobody that I could say, ‘I could date her and I want to be like her’… I just kind of thought I don’t want to live like this. I don’t have to, I don’t need to, I just shut down the emotional life.”

Since rising to prominence as one of the most powerful openly lesbian individuals in Hollywood, de Rossi has come to view her sexual identity through an entirely different framework. “I really, honestly think that anybody who is openly gay and visible is powerful,” she told Out magazine earlier this year.