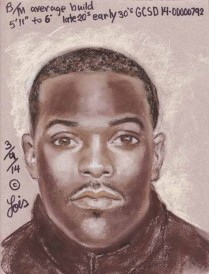 The sheriff’s office in Galveston County, Texas, has released a sketch of a possible suspect in the murder of a Houston lesbian couple. The man is believed to have been with the couple shortly before their deaths.

Britney Cosby and Crystal Jackson, both 24, were found dead outside a convenience store in Port Bolivar last Friday. The couple, together two years, had traveled to Galveston for Mardi Gras. Police report that Cosby was bludgeoned to death while Jackson, mother to a 5-year-old daughter, was shot.

Investigators are asking for the public’s help in identifying the man in the composite sketch. He is described as a black man, possibly in his late 20s to early 30s. He would have been last seen with the women and may be driving a new silver 2006 Kia Sorrento that belonged to Cosby. Police are continuing to search for the missing vehicle, which could be a key piece of evidence in helping solve the killing. The vehicle has paper Texas tags.

Meanwhile, earlier this week members of both families gathered in Port Bolivar to pray at the spot where the women were found and pass out flyers depicting the composite sketch of the possible suspect.

“I just want closure. It’s not fair,” Cosby’s grandmother, Patricia Dixon, told FOX Houston. “I know we all have to leave here, but it’s not right to take someone’s life and throw them away like garbage.”