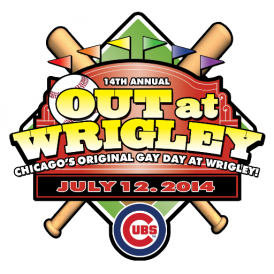 Tickets are now available for 2014′s Out at Wrigley, the largest annual LGBT sporting event in the country. This year’s game is set for Saturday, July 12, when the Chicago Cubs take on the Atlanta Braves in their now-100-year-old ballpark.

Last year’s Out at Wrigley was paired with the induction ceremony for the latest project of MTM Chicago’s Bill Gubrud, the driving force behind Out at Wrigley, and Jackie Weinberg of Supergurl Images: The National Gay and Lesbian Sports Hall of Fame (NGLSHOF). The new organization, which seeks to recognize and preserve the history of individuals and organizations whose achievements have advanced sports and athletics for the LGBT community while also providing outreach and education to the sporting world to help make it a more welcoming and safe space for LGBT youth, inducted 26 members into its inaugural class in August 2013.